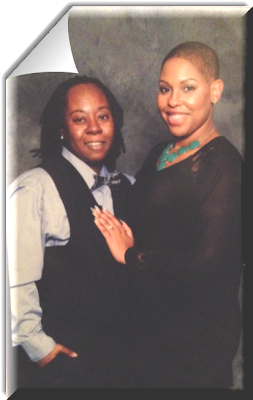 How did you meet?  Sheila: We met on a social site but we both were not looking for anything serious. We actually worked for the same company for 5 years and we spotted each other once. Chantelle: I thought Shelia looked mean because she always frowned. Shelia: I thought she was stuck up because she was always walking around with her nose in the air ☺.

What made you consider Craigslist? Chantelle: I thought that it would be an easy way to meet people. Sheila: Chantelle’s ad caught my attention. It was entitled “Turning Over a New Leaf”. Her title made me want to see what she was about.

Sheila, after you learned that she hadn’t dated women before, how did you feel?  I was iffy, scared and paranoid but being around her made me feel at ease. She wasn’t trying to get into a relationship. Also, she was outgoing, calm and sexy.

Chantelle, you had never been in a lesbian relationship. What gave you the confidence without the experience?  I knew that I was gay at 18 but I had to suppress my feelings. When I was 24, I came out to two friends and they both said they always knew that I was gay. That night before I placed the ad, I went to a club but I could not stop thinking about women. The next morning I knew that I was going to come out. For some reason, I had courage and I felt that I no longer wanted to hide.

What was the initial attraction? Chantelle: Since we spent most of the time through email and text, her conversation was what attracted me. But when we met each other face to face, I was so shy that I could hardly look at her. When I gathered the courage to actually look at her, it was her smile. Her smile lights up a room and I wish she would smile more. She is so beautiful and her smile just enhances that beauty. It was also just her presence; she was/is strong and confident. Sheila: I was attracted to her honesty. She is honest about who she was and she is honest with me. I loved her conversation too. She is so open-minded about so many things. I loved her smile and she always appeared to be happy about life. When you are around her, you forget why you are upset. How do you deal with and face challenges that come up in your relationship?   Sheila: We discuss them; we pray on them and take time with just each other to find the source.  Chantelle: To be honest, the first year was a learning curve for me. I don’t like to argue because I saw what it did to my parents and knew what it did to me as a child. I like to cool off first so I can be more logical. That way I can see if it is me or if it is a real issue.  Shelia is the opposite; she likes to deal with issues in that moment. I had to learn how to take a different approach and actually learn how to deal with issues right then and there. I had to learn how to speak my mind and to do it in a way that’s respectful. That has actually caused less conflict because we come from a place of love instead of a place of anger. We still get into it sometimes which is to be expected, but it is definitely less frequent compared to last year. Sheila: I had to change too. Chantelle says that I can sometimes be mean but since I have been with her, I have changed. I had to learn to take feedback and think about her feelings. I realized that I had to say things a different way. In the past, people were not honest with me but she was. I am still working on it; I am a work in progress. 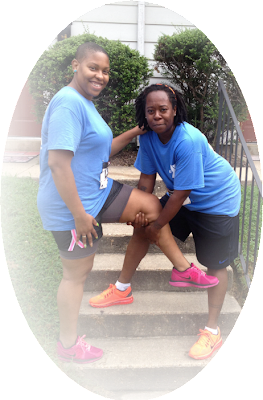 How have you learned to manage and celebrate the differences in your personalities? Chantelle: Sheila is my yin to my yang; we balance each other. She is more confident, bold and outspoken. I admire that and I have adopted some of her personality. She just doesn’t tell you what you want to hear and she listens to other perspectives. I am optimistic and Sheila can be more pessimistic. I wouldn’t want date someone just like me.  Being with her gives me a different perspective on life.  Sheila: I can be defensive and Chantelle tells me to chill out. She reminds me that everybody does not have an ulterior motive. I love to watch how she moves around the room and livens up everything around her. She is the perfect match for me and she has helped me with networking too.

Blending families is frequently a challenge for new couples. How was that process for you? Sheila: My relationship was hard for my daughter because I usually didn’t do relationships, I just dated. She has always wanted me to be with someone and always wanted me to have someone. She was very open but there was an adjustment. Chantelle: My family made it difficult. My grandmother is over-bearing and she is not accepting. She kept asking my daughter questions which made my daughter feel uncomfortable. My parents are more positive and accepting.

Sheila: We work as a family and we do everything as a family. We try to learn about each other. We play games and we have open communication with all of the girls because they have questions too. The older girls see counselors because we wanted to make sure that they could express themselves not only about us, but also about school and their feelings. We were firm and we made sure they realized that we were/are a team. Chantelle and I discuss everything as a team and have learned from trial and error. Chantelle: We have good communication and we always talk everything through. Counseling is so important because we couldn’t talk to our parents. Also, we know that they have issues that we may not be able to help with.

What role does spirituality play in your relationship?  Chantelle:  It is very important.  When we first met we were both in odd/difficult times in our lives.  Our spirituality has grown so much within the past years. I am not by any means religious.  I cannot stand the word religious. I am more spiritual; I have my own relationship with God.  I know who He is in our lives and we make it a point to recognize the things He has done in our lives separately and together.  We joined a church together so we have definitely placed God in the forefront. Sheila: It plays a major role. We love each other but we love and honor God more. Since I have met Chantelle my spirituality has grown so much that I often find myself in amazement.

What role does sensuality play in your relationship?  Sheila: Sensuality is important and we never leave the house without some kind of connection, either a hug or kiss. Cuddling and even sitting near each other without touching has become more sensual to us because of our connection has grown. Chantelle: Sensuality is very important. I have become so much more sensual with Shelia because she makes it easy to be comfortable around her.  My kisses have even changed; they are more than what they were.  Every time I kiss her, it feels like fireworks. Her touches have become more sensual too and I have actually told her that when she touches me it sends a rush all through my body. Sheila: We keep the fires burning and I am very spontaneous. I love to catch her off guard and I still flirt. I still spit game because I love making her blush.  Chantelle: I like to role-play. I love to pretend that I am somebody else in the moment. We really do pay attention to each other and we love to do things like drink wine, rub each other’s legs, light candles and send texts to remind each other that we want each other. Sheila: We also work out together and we make sure that we stay sexy for each other.

Complete this sentence: She would be surprised to know that I love her…… Chantelle: Her perseverance. Sheila has been through a lot in her life. I have been through half of what she has been through and I have tried to commit suicide. She’s strong. She keeps going no matter what. She gets weary but she keeps her eye on the prize. She does not let her past stop or diminish her. She’s an inspiration to me. Sheila: Her humility. Chantelle doesn’t realize how gorgeous she is. Even when people tell her how beautiful she is she doesn’t let it go to her head. When she gets promoted on her job, she stays humble. She appreciates and thanks God for everything.

What advice would you give to other couples?  Sheila: Keep faith in God and in yourself, not just each other. Communicate, limit the people who are involved in your relationship, don’t keep secrets and treat your partner like a best friend. Chantelle: Communicate, be willing to grow individually and together, be positive, pray together, be open and be honest

What 1 word describes or characterizes your relationship and why? Sheila: Growing. We are still learning each other. We are still learning how to be in relationship, how to co-parent and how to grow individually and as a couple. We are growing. Chantelle:  Rollercoaster. Our 1st year was like a roller-coaster. We had our moments of really battling and now we are fine. Our relationship is fun, crazy and spontaneous. It is unexpected ride and I hope the ride never ends. 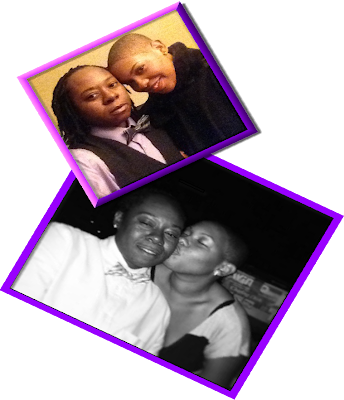 Sheila: As of Dec 12, 2013, we are engaged to be married. I spoke with one of Chantelle’s co-workers who helped me time everything just right. I came to her job and after their meeting I stood outside of her window holding up post cards that read different things. The final card said “Will you Marry Me”.
Chantelle: I was in shock. I couldn’t believe she was really at work after I just spoke to her on the phone. I felt like I stopped breathing for a few seconds until my coworkers actually reminded me to breath.
Shelia: I was nervous and excited but I knew it was the right time. All I could do is picture her as my wife not wifey or girlfriend.

We thank you for sharing your love with us at Create Love! Your story will encourage, inspire and uplift other couples. We wish you continued success and happiness. www.createloveforwomen.com