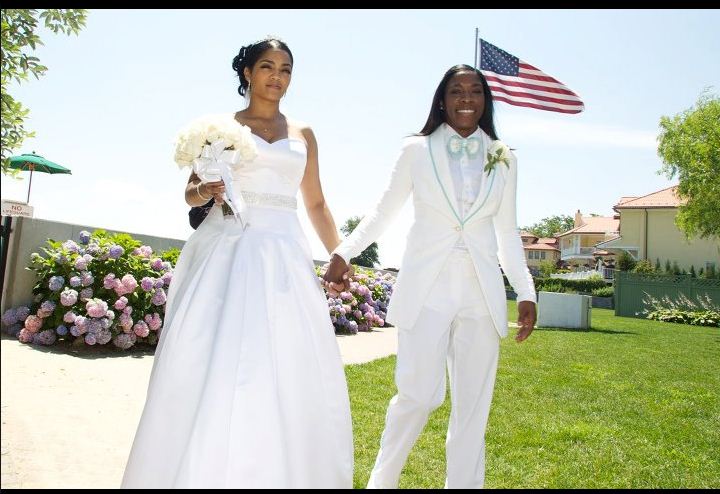 How did you meet: Nez: We met at a grand opening that Sabrina was promoting. I was attracted to her but didn’t give her that indication until she showed interest. We both played it cool until Sabrina made the move by asking our mutual friend to “hook us up”. I gave her a hard time by telling her friend “if she wants me, she knows where I’m at”. Sabrina came over, extended her hand and there was our first dance, which I should add, was an INTENSE connection! Sabrina: That’s right…I wanted to check her out first. That’s why I sent my friend. I did not want to be associated with anybody who did not carry herself like a lady. So I was quiet and watched her. Since there was an obvious connection, each time I saw her I spoke to her. I asked her out but she always declined my invites. I later learned that her fear was “hurt and games”. We both never felt that amazing energy at first glance, and she wasn’t ready to meet anyone or invest her heart (‘cause we KNEW where this would go)! Nez: It is interesting that we never crossed paths earlier. We both had the same close friends and knew the same people. I even saw pictures of ME with our mutual friends at her house but we never met each other until that night. It was in the cards to meet when we did. We we’re READY! 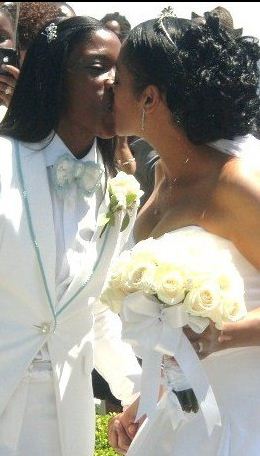 What was the initial attraction? Sabrina:I was attracted to her big beautiful eyes, and I thought that she was sexy too. I loved her smile. Nez: Physically, her smile. But I liked everything about her. She showed interest in pursuing me. She made it easy to rid me of my fears and trust her wholeheartedly. I never felt that before. She always treated me like a lady as she swept me off my feet. I admired how she spent time getting to know my family INDIVIDUALLY. She built relationships with them and that meant the world to me. In fact, my mother told me that she moved to Florida because she knew that I was in good hands with Sabrina. Also early on in our relationship, I told her that I was on a spiritual mission and that I was doing some soul searching. She took that information and ran with it. She did some research and we finally found a church home.Sabrina: I was also attracted to Nez because she always paid attention; my interest became her interest. She’s a great mother to her daughter and we are both family-oriented. She became my best friend almost immediately. What felt good was when my mother met her, her words to me were “I know she’s the one, so introduce me properly”.

What are the keys to success: Sabrina:Communication and trust; letting my guard down. You sometimes take old stuff from past relationships and bring into the new relationship. But I learned to trust and let goold stuff. Nez: Both of those and romance. I gave her all of me. I am not going to let her want for anything. So many relationships die because of no romance. But romance and intimacy are important, and they play an important role in a relationship. Make sure that your partner is satisfied in everything, even sexually, so she doesn’t go lurking. Try new things as you explore each other. Always “keep the excitement” going so no one gets bored and it doesn’t became routine. Sabrina: I like that about Nez. She always asks me if I am satisfied and if I am happy. I know that she wants me to be happy not only sexually, but spiritually and mentally too.

How do you face conflicts and challenges: What is your process to handle it? How do approach the topics?Nez: In the past relationships, she used to run and leave the house. But that was not going to happen with us. So our first mission was to get her to stand and deal with the issues. We learned that we have to give each other some quiet time and we have to remember that we are still learning each other. Sabrina: I was stubborn. I did run but she laid down the law. She said that “you are not running” so we learned how to resolve issues by compromising and communicating,without yelling or screaming when “I’m on 10”. We even write letters to each other at times. This helps when the topic needs major attention and no one is willing to fold. We try not to go to bed angry and neither of us allow our pride to dictate who says “I’m sorry”. Our relationship is most important. 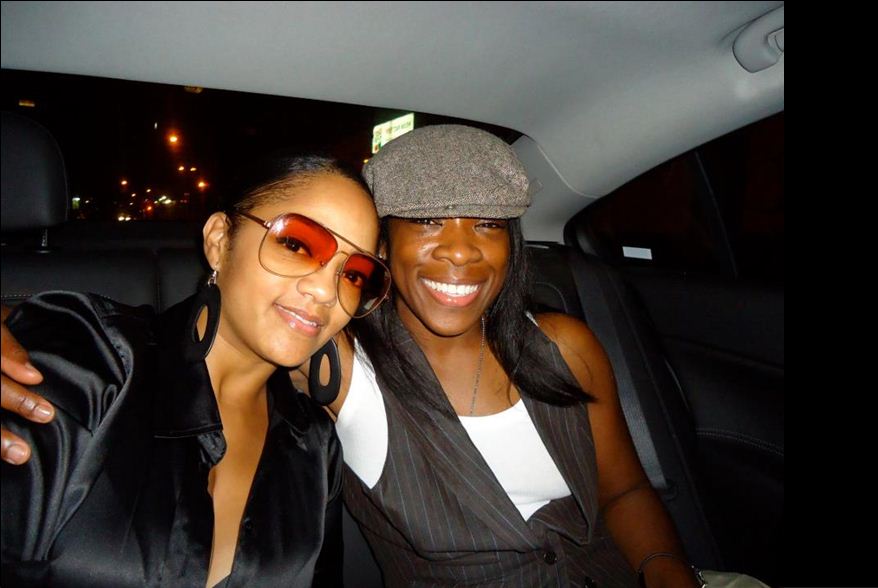 What has your relationship taught you? Nez: Patience-It has taught me patience. We are different, but we have learned to listen to each other and we are committed to keep learning about each other. We are learning to accept those negatives things too and to make positive changes within ourselves. I don’t like to look or feel vulnerable so the hardest thing to learn was TRUST.  I am a strong Leo, but I am really a kitten inside. I had to be open to LOVE with no holds barred. Sabrina: Compromise – It has taught me compromise. I never dated someone with kids (young adult), so I had to learn that it was not just us. I had to learn to extend myself to her daughter.  Since I knew that I wanted to be with Nez for the long term, I accepted her with open arms. Also, I had to learn to tone down the flirtation too. I was little bit “extra” and so I had to learn to tone it down. It was important for me to respect her and for her to feel comfortable. ‘Cause if I don’t respect her, how do I expect anyone on the outside to respect her?

What has surprised you most about each other?  Nez: Sabrina can hold on to a commitment and grow. She is not what people said she was. She wasn’t any of that with me. She has always been a supportive loving wife. Also, I have a high sex drive. What I love about Sabrina is that she allows me to be me. She allows me to be the aggressor (that I tend to be sometimes) so there are no-bar holds with us sexually. We don’t role play in a sense of having limitations. Role play is supposed to be fun and she allows that. I love that we’re on the same level. Sabrina: I learned that there is not role-playing with us. I didn’t take on that I had to do certain things. We just adjusted and I love that we don’t have roles as Nez said. Nez: We are just lesbians in love.

Why was agreeing to not play roles important for you? And, why do you feel that more couples are not as flexible? Role playing as in RULES: example- who’s fem, who is aggressive- isn’t important because you lose sight of who you both are as individuals. Nez: I don’t like to be stereotyped. When you set rules and limitations, you don’t allow yourself to be fully satisfied. I love my wife and I want to explore her and please her in every way creatively. Sabrina:I’m a woman who loves my woman. Fem-aggressive exterior and my wife has a fem exterior, but without a doubt, we can both be sexually aggressive in bed J. 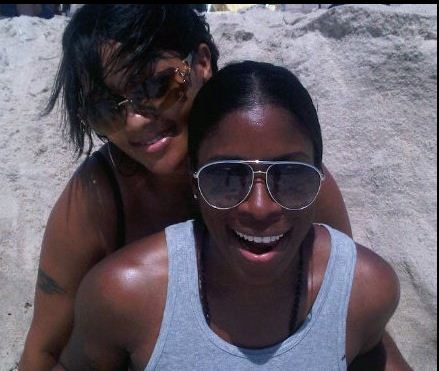 What advice would you give to other couples: Sabrina: Be yourself! Be comfortable in your own skin. Do what works for you. If there is a child involved, remember that she is important too. That is important for us because we are both family-oriented people. And, communicate. Remember that you will always be learning each other. Also, try to do loving things together. Go out on dates and really enjoy each other. With her, I will do anything. I love coming home to her. We have FUN! We are friends first. Nez: Don’t jump into marriage and take time to build your relationship. Love first and build trust. Meet each other’s friends and families. Learn about each other financially, emotionally and spiritually. Relationships take a lot of work. Also, be willing to make shifts – sometimes relationships require changes.

When you look in her eyes, what do you see? Sabrina:I see happiness, pure bliss. I know that she is it. This is my lifetime. I know that everything is not going to be a walk in the park, but I know that I will learn with her. We are the best of friends and we don’t have secrets. Every day with her feels like a honeymoon. With her, I feel good. Nez: I can stare in her eyes morning, noon and night. I feel as if I am in a dream. I fall deeper in love with her every day. I am crazy about her without losing myself. I can see through her soul. When we make love, she makes me cry.

What is the most romantic thing that she has ever done? Sabrina: She told me that she had never been in a limo before so on her 38th birthday I planned a limo ride. I called her boss, and all her friends knew too. I blind-folded her and then a beautiful limo picked her up at her job. The limo was filled with flowers and champagne and then I whisked her away for the entire day. I took her to Atlantic City and we spent the entire day shopping and enjoying the beach. After that, we went to dinner and had sushi. We had the limo all day and she really enjoyed herself. I wanted her to feel like a celebrity because when you are special to me, you get all of me. Nez: I planned a surprise birthday party for her. I had all of her friends meet us on the rooftop of her a restaurant and she was completely surprised. We partied until 3 am, and that I flew her to Miami for the weekend. I packed her bags and we just left. Sabrina: One day we were shopping and I made a comment about this leather jacket and scarf that I liked. When I unpacked my bag in Miami, the leather jacket and scarf were in there. I don’t even know how she did that.

What song describes your love? Nez: There Goes My Baby by Usher and My Whole Life has Changed by Ginuwine. Sabrina: Try a little Tenderness by Otis Redding
(Interview conducted by SharRon Jamison)

We are grateful to Nez and Sabrina for sharing your love with us at Create Love for Women who Love Women! www.createloveforwomen.com